There are plenty of sporting activities in the surrounding area.

You will find all the contact details of the service providers on the Tourist Office website: www.lacorsedesorigines.com

Abounding in postcard beaches and secret coves, Corsica competes uncompromisingly with the turquoise waters of the Caribbean.
From wide bays dotted with water-worn pebbles to remote sandy beaches accessible only by boat, it offers a jaw-dropping range of breathtaking getaways.

South Corsica is home to some of the most idyllic coastal environments in the Mediterranean.
Between turquoise waters and fine sand, dotted with shrubs and pines, it is the ideal escape for lazing around on dreamy beaches.

For a more active holiday, dig out your snorkelling attire to experience South Corsica’s translucent and often shallow waters, accessible even to beginners. The quality and diversity of its snorkelling spots will conquer underwater enthusiasts.
Moray eels, sea breams, porgies, wrasses, rays, cuttlefishes, starfishes and octopuses, populate its seagrass meadows and rocky bottoms, even at shallow depths. 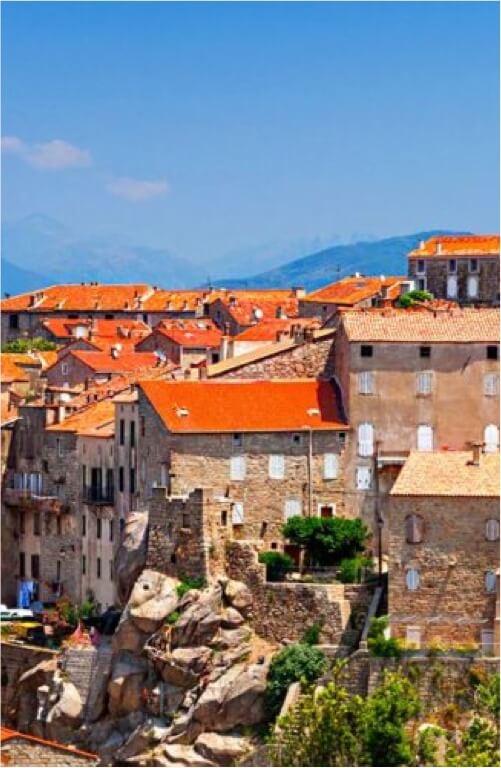 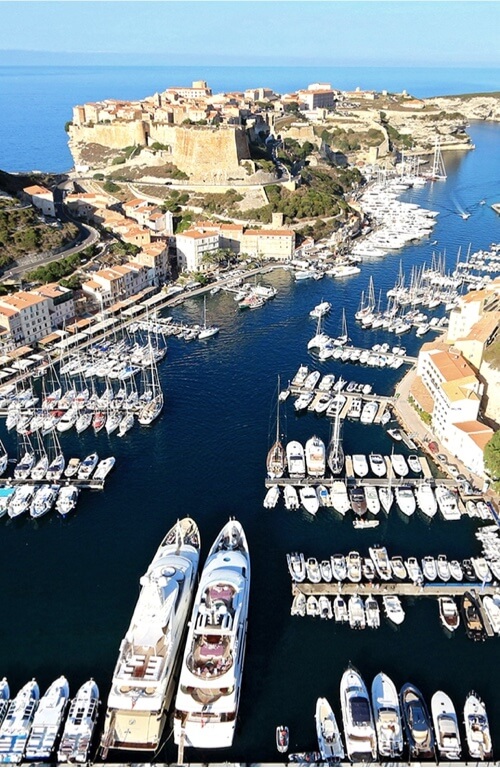 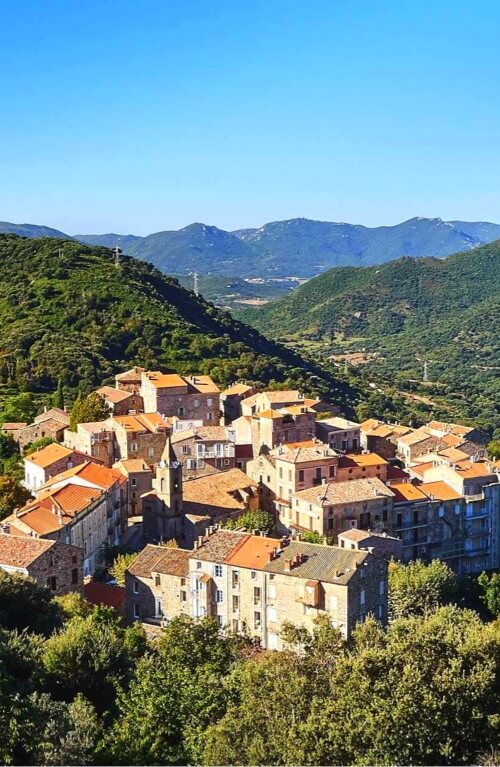 PROPRIANO
Nestled at the heart of the Gulf of Valinco, Propriano is a renowned seaside resort with its numerous beaches and coves, marina, coastal activities, gastronomy and heritage.
Propriano is the most pleasant location to alternate between white sandy beaches and mountains, not forgetting its fabulous hinterland and regional wines.

SARTÈNE
The most Corsican of Corsican towns, according to Prosper Mérimée, Sartène is a must-see cultural stop with its narrow streets and charming old houses, hidden in a granite fortress.
Overlooking the valley of the Rizzanese, do not miss its museum, the old Genoese bridge of Spina Cavaddu and the archaeological site of Cauria.

CAMPOMORO
A small authentic fishing village, Campomoro is a little piece of heaven with its crystal clear turquoise waters and sandy beach.
It is dominated by its Genoese tower, the highest in Corsica, with peculiar star-shaped defensive walls which embrace the landscape.
Do not miss its coastal hiking trails!

TIZZANO
Small paradisiacal fishing harbour, this isolated village is bordered by several wild beaches and coves with translucent turquoise water.
Charming restaurants await the most delicate palates.
Take the coastal trails to discover the lighthouse and tower of Senetosa, on one of the largest sites under the protection of Corsica’s Coastal Conservatory.

ROCCAPINA
The so-called “Lion of Roccapina” is a superb formation of pink granite naturally shaped by erosion, recognised as the guardian of the Genoese tower of Roccapina.
It faces a magnificent beach of fine sandy beach with turquoise and crystalline turquoise water.
This setting is the starting point of a trail leading to the huge beach dotted with small dunes called Erbaju Beach.

BAVELLA PASS
Bavella is a highlight of the Corsican mountain with its needles, its dramatic rock formation with colours ranging from the most delicate red to the darkest grey, and its forests of Laricio pines.
The point of departure of many hikes for all levels, in particular, the famous “Hole of the Bomb”.
Enjoy the most beautiful panoramas of canyons walls, natural pools and clear streams at the foot of Bavella Pass!
Not to miss: Viséo’s mythical horse races in July and August.

ALTA ROCCA
The “Land of Lords” consists of 16 villages, rich in customs, traditions and heritage (ovens, bridges, mills, fountains, Romanesque churches, chapels and convents).
Alta Rocca is part of the Regional Natural Park of Corsica and is home to the archaeological site of Cucuruzzu.
Located in Levie, its museum is a must to visit!

FILITOSA
The jewel of island megalithic art, considered by scientists as one of the most enigmatic cultural sites of the Mediterranean.
One of the most astonishing collections of prehistoric art in Europe, unveiling the origins of Corsica’s unique heritage.
Filitosa offers a panorama of 8,000 years of human history.
Listed on the list of 100 historic sites of common interest to Mediterranean countries.

HOT SPRINGS
The region offers two natural hot springs, the Baracci Baths and the Domaine Rosa des Caldanes.
These hot and sulphurous thermal waters have been recognised for their healing, therapeutic and relaxing properties since the Roman era.

THE POND OF TANCHICCIA
A preserved natural area, the pond of Tanchiccia is home to various plants and animals, including endemic wetland species, such as
orchids, aquatic plants, birds, reptiles, amphibians, insects or mammals.
There are 392 plant species and more than 130 bird species, including nine European herons and freshwater turtles called “Cistude d’Europe”.

U CATENACCIU
The most famous of the Good Friday procession!
“L’enchaîné”, a chained and hooded penitent bearing a cross, follows a steep route across the town symbolising Christ’s rise to calvary.
The penitent is dressed in a scarlet alb and a red hood.
Over a distance of 1.8 km, he carries a 37 kg solid oak cross, 17 kg chains at his feet, and must fall three times on his way.

BONIFACIO
Bonifacio, also known for its steep white limestone cliffs thus the name “City of Cliffs”, was built on an impressive rocky promontory overlooking the sea.
Between sea and maquis, Bonifacio takes you an immersive discovery of historical Corsica where man has left his many footprints since the Neolithic era.
A quintessential discovery of Corsica’s art and history in a breathtaking setting!

AJACCIO
The capital of Corsica is the city of birth of Emperor Napoleon the First.
“La Maison Bonaparte”, his ancestral home, is now a museum exhibiting family objects.
The Baroque cathedral of Ajaccio, officially the Cathedral of Our Lady of the Assumption, houses many murals by Delacroix and Tintoretto.
This is where Napoleon was baptized.
The archipelago “Îles Sanguinaires” is an integral part of the Corsican natural and cultural heritage.

SCANDOLA
Listed as a Natural World Heritage Site by UNESCO, the Scandola Nature Reserve is undoubtedly one of the jewels of the Mediterranean with its red-tinted rock peninsula plunging into the turquoise water of sea.
This vast territory is simultaneously a marine and land-based reserve, allowing a genuine and integral protection for the entire biodiversity.

RESTONICA VALLEY
The city of Corte, at the heart of Corsica, lies at the mount of the glacial valley of the Restonica which offers multiple possibilities for bathing in limpid and fresh water, as well as numerous hikes.
Pure gems of nature: Lake of Melu (1,711 m – 5,610 ft), Lake of Capitellu (1,930 m – 6332 ft) and Lake of Creno (1,310 m – 4298 ft) surrounded with Laricio pines and partly covered with water lilies.

Due to the current health situation, our cancellation policy has been adapted to ensure that you can book with complete peace of mind.

The deposit can be refunded up to 7 days before arrival, according to the conditions indicated at the time of booking.

After the free cancellation period, if your trip is affected by government restrictions (lockdowns, travel bans, border closures), you will have the opportunity to obtain an 18-month credit note and then a refund.

Corsica linea : Discount on your crossing